Jack the Ripper lived on Flower and Dean 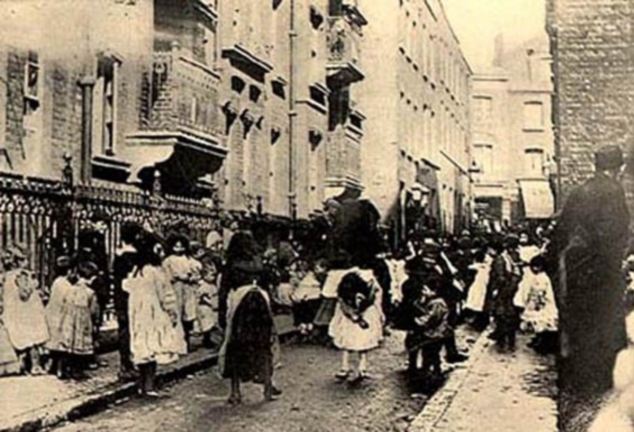 Jack the Ripper 'lived on Flower and Dean Street, and may have died in a mental asylum': Expert uses algorithm to reveal details about London’s notorious killer

• A former Canadian police officer who pioneered the use of geographical profiling thinks the Jack the Ripper lived on Flower and Dean Street
• The street was part of a slum area in the Whitechapel area of East London
• Street was destroyed in the Blitz, but was near the sites of the murders
• Detectives conducted door-to-door inquiries at the addresses in 1888
• Each of Ripper's victims lived in doss houses within 200 yards of the road
• Expert used sites, the location of a scrap of bloody clothing, and an algorithm to calculate the Ripper's likely routes on the days of the murders

Interesting enough, that my main character actually lived in the back of one these row-houses that were on Flower & Dean. That said, looking geographically, I found Buckle Street to have been a better suited street for hiding a killer. At the time of the murders, the town-homes on the north side of the street were in terrible shape, rent was cheaper than that on Flower & Dean. Buckles St was a dead end street, with only two passages that led from its very end onto Commercial Road and another no longer that that went south out to Ali Street, that access no longer usable.

From Buckle Street, one could take the east passage and be on Commercial Road in less than 1.5 minutes, from there that same person could travel the main roadway or take several alley way so to get to what is now Henrequess Street, renamed after the body of Elizabeth Stride was found in Duffs Yard, an old Carriage shop located on the east side. That murder has often believed to have been interrupted by a man an his cart. The one responsible would have had to hide in the darkness of the courtyard until the driver went to get assistance them make good there getaway. Taking the same, or similar ways back, the killer would be arriving home not but a few minutes at best before the responding constables were only just arriving. Setting off again from home, the police occupied with one murder to the east, it was an easy trek to take care of victim number two, Catharine Eddows, that same night with in the dark and secluded confines of Mitre Square. Mitre Sq. was located only 4 streets to the west and with numerous lanes and major roadways taking you there, again with three possibilities of entrance to the Square itself. Once one left Buckles St and went west you would reach Leman Street, taking that north a short distance you would be on Whitechapel Road, from there, you would, walking smartly west, you would pass four streets and veer off that what was then commonly called The Prostitute Church. At this point you had two option, north or west and take your pick of passage or main entrance that was both dimly lit and contained three dark ways of escaping once the deed was done. 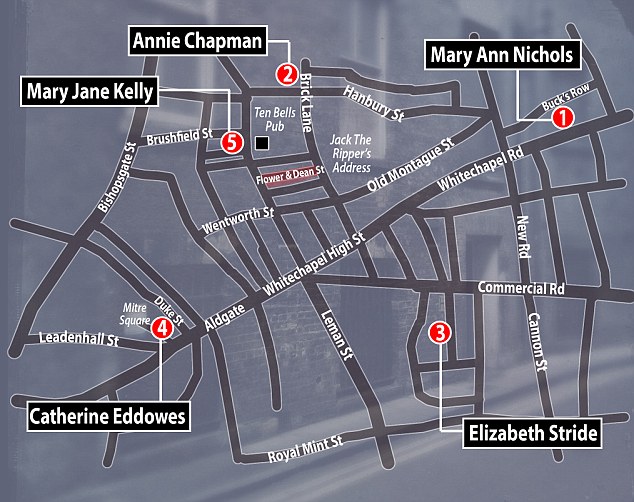 Map from Daily News article. All rights and credits to The Daily News.

Mary-Anne Nichols, or Polly, or Penney Nichols was discovered on Bucks Row, deemed the first. Allegedly driven off by other women for pricing her trade for only a penny, (thus the name) she had a long lonely walk to her death on Bucks row. The easiest access from where was last seen would have been along Whitechapel road, Buckles Street puts the kills home one block away from where many prostitutes congregated near Osborn St and Whitechapel, three streets closer that Flower and Dean. Following the victim the several streets would have been easy even at night, especially if the one following her was also female. Polly was the first official murder alleged to be done by the Ripper, far away and simple compared to the others who had evisceration and mutilations.

The other two, Annie Chapman or Dark Annie were found more north, but Annie's murder on Hanbury Street put the killer within Brick Lane, a street to the turns into Osborn St and meets Whitechapel Road right on top of Buckles Street. The last official murder, that of Mary Jane Kelly, was found in room 13 of Millers Court, a street that fed it, no longer, in is a place a car park and warehouse with loading docks where the original apartment is close to have been. Again you have a shot walk to a main street to take you straight back to Leman Street and that passes Buckles Street. Mary Jane was killed inside, the body mutilated over hours. The killer had no fear of the body being found until the morning, so they would have left the room, locked the door behind them in order to by more time to escape and slowly make their way home. Is it possible the killer lived there, sure, its possible, but it also had a wider class of people living on the street to, not so much on Buckles.

One note to the police, it states I will not stop until I am Buckled proper. If were are joking, leading on is taunting fashion, it could mean "being handcuffed and taken into custody, but, it could also been, I wont stop this night until I am home proper, (in good order) Buckled being the loose reference to the street.

In Victorian England, no one, not even a constable is going to stop and woman at night, one who seems of sound mind and ask her why she had blood on the hands, her skirts or her dress. She could walk through a myriad of police completely unnoticed simply by gender alone.
Now, if we take into account the killer was a well to do women the she very well could have lived in and around Flower & Dean, but more likely on Thrawl Street. Only this street had better access to the main roads.

My thoughts only and only based on what I found researching by book Whitechapel Road; A Vampyre Tale.