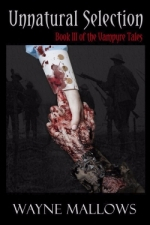 Within the pages of Unnatural Selection, you will be taken back through time to World War I, Europe. Aremis, having become utterly discontent with his life, finds himself contemplating his own demise. Seeking an end to an existence he neither asked for nor can seemingly rid himself of, he formulates a plan that will see his final days come to fruition on a battlefield in France. The plan itself, although well founded in theory, does not go quite as he had envisioned and he finds himself in the care of a young nurse, one who despite her professional mannerisms, seems to carry her own dark secret.

While carrying out her duties within a makeshift field hospital, this young woman briefly catches sight of something within the man she is fighting desperately to save; something that she is convinced is not of this earth. Unable to confirm what she had seen with others who had worked alongside her that day, she files the unsettling image away in her mind and quietly continues to go about her daily routines, while at the same time maintaining a curious interest in her new patient.

What had started out as nothing more than duty-born obligation to save another human-being, slowly begins to evolve into something more intimate. The romantic connection that is gingerly created between a nurse and her patient; soon has her questioning everything she has come to understand about life and what lies beyond. Those questions ultimately bringing her face to face with, not only her own mortality, but the dark truth surrounding her own shadowy past.

Cover artwork by Wendy Teal of Canon Studio. Setup and FX by Wayne.