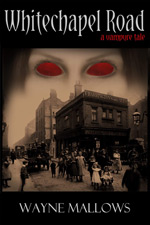 Born in the south of England in 1854, Aremis' life had been largely pre-orchestrated from birth, but unbeknownst to anyone, that life was not to come to fruition.

Expecting to meet his wife-to-be at the annual harvest festival in order that their wedding could be formally announced to the members of their small hamlet, Aremis had no idea that the evening would usher in an evil far behind his comprehension.

In the wee hours of that same night, Aremis is discovered lying upon a deserted forest road. The side of his neck had been torn open and he was barely breathing. Take to the home of the local doctor, Aremis is nursed back to health by his sister Temperance, and as he slowly regains his strength, the terrifying truth begins to unfold.

Temperance, gifted with something she refers to as, "her other sight", quickly begins to realize her brother is no longer the man she had grown up with. Unable to reconcile this situation and unwilling to jeopardize the lives of herself or her family, Temperance devises a plan. Aremis, with few options available to him, is forced to leave his home in the hope of finding answers within the larger city of London.

It is there, on the shadowy back streets of the city's unsavoury east end, haunted by vivid night terrors that blur the line between that of reality and fantasy, he finds himself afflicted by what appears to be an ancient curse. As he tries to come to terms with this horrific situation, he is suddenly drawn into playing a deadly game of cat-and-mouse with a beautiful female stranger. As the bloody game unfolds, it quickly becomes evident that this deadly woman may be the only one who can explain the horrors that have besieged him. With the entire community in danger, and time running out, Aremis is propelled towards an inconceivable confrontation, one of which will find him at the centre of the most horrific string of murders in London's history.

From Facebook - Wayne Mallows has done it again - By Vicki Bermingham Thomson, April 22, 2020

This review is from: Whitechapel Road - a Vampyre Tale: Wayne Mallows has done it again with his explosive rewrite of Whitechapel Road, Book One of The Vampyre Tales! He Takes us into the life of Aremis , but the story is more detailed and has a fluidity that lets the chapters flow easily together. The characters come to you off of the page and invite you into their story. You feel the emotion and angst that Aremis goes through in the final realization that he is no longer human. While in the grim streets of Whitechapel a killer is cutting down prostitutes.Does "Jack the Ripper" hold any answers for Aremis about the creature who made him what he is? This one's a keeper for vampire fans, Ripper buffs, and anyone who enjoys books set in the late Victorian Era London.

I will also have copies of the book with me for sale at various events and will be doing book signings also.
I look forward to hearing how you liked it.