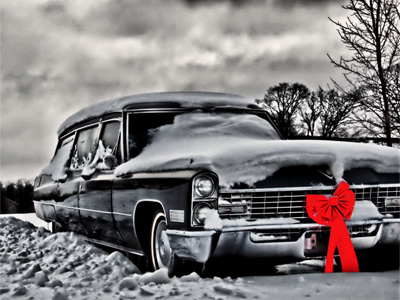 Twas the week before Christmas and all through the town, everyone was a crab and their spirits were down.

My feelings still dashed by the October from Hell, the arrival of Christmas wasn't sitting too well.

In an attempt by myself to create some good cheer, how to achieve it would be something I feared. I sat and I pondered, for quite a long time, to discover a clue behind feeling sublime. When sudden and swift a thought it did come, I’d discovered a way to make me some fun.

Away for some make-up, with glee I did scamper, while the rest of my family was busy with chatter. I don'd on some white some red and some grey, for I had an idea with my own sort of sleigh.

Dressed in black velvet from my nose to my toes, the only exception; Santa's hat, in the colour of rose. A red velvet topper trimmed off in bright white, set high on my head for my drive through the night.

With I in my make-up my hearse in the drive, I set off for the stores and a tree I could buy. But out on the roads the feeling was same, no one was happy they all looked insane.

At the dead tree-store I did finally arrive, in Victorian splender and looking quite sly. Fangs of pearl white and eyes of bright red, I could see right away the looks of sheer dread. The fear on the faces of those in the lot, judging and pointing like rude little tots.

I parked my steel coach, between a car and van, catching less than good cheer from one stout little man. I smiled and a wave to him I did share, in return I received but his families cold stares.

The trees are all dead, so what's the big deal? What could be better than processional wheels? To retrieve the bodies of once living trees, to bring them back home to display and to please.

I picked out my choice, paid the nominal price, for a slain babe of nature now don't it sound nice? I picked up my prize and was turning to go, when a young man of 20 did suddenly show.

Perhaps guided faith or the love of the season he inquired if he might take my tree without reason, out to the parking-lot of the store, to my van, my truck or my small little car. At last, someone not blinded by gifts, loot and by greed, someone was here to help another in need. Not bothered by look nor my Gothic attire we walked to the car over gravel and mire.Not sure of his place with I and my tree, for it was now Christmas and not Halloween.

Upon seeing my sleigh, the door open wide, he said nothing degrading but placed the tree just inside. With my purchase now loaded safe in the back, he bid me good night and went back to his racks. Racks of dead trees not belonging to him, he looked after the patrons as though they were kin. Persons like you and odd ones like me, all of us out in search of a tree, to take home to our families, to bring home some cheer of the seasons lost meaning, I assure you my dear.

I called after the lad before he was gone and bid him farewell with thanks and a coin. A small token from me for his kindness and care, something I wish more people would share.

For better than gifts from stores that are bought, a present of kindness is something that's taught. Told to our children from times long ago we've told them to care but what to we show? We show them that more is often much better than a gift of kindness shared with another.

So I turned the grey ghost and headed for home, the smell of fresh pine needles filling my nose.

The night had been fun even after all that, there's something quite jolly about a bat in a hat.
~Wayne

Thanks to Robert Myer for permission to use his photo for this.